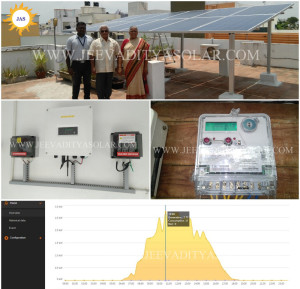 “Jeevaditya solar power Pvt Ltd is started with a vision to popularize solar power as key source of power. We specialize in Solar Home systems, Commercial Solar power plants, Solar Inverters, Panels etc. We provide complete solutions for both domestic (home or residential) and commercial applications. Our high quality products/systems along with customer-friendly service culture make us a popular choice for Solar power.

On Grid Solar System Rooftops are receptors of raw solar energy and we can transform these ordinary rooftop into a solar power plant. With our highly efficient and integrated solutions we make it simple for you to install and operate a rooftop solar system. Our expertise lies in providing roof top PV systems that offer an independent power source to commercial and industrial consumers those are having more than 5 KW connecting load which gives more both economical and environmental advantages. Having garnered sizeable experience in designing and executing rooftop projects of various scales, we offer efficient and cost effective rooftop solutions including designing, engineering, procuring, installation, commissioning, operation and maintenance. Levying thrust on quality, optimum performance, reliability and safety, we have emerged as one of the most preferred providers.
On-grid solar systems are definitely the most common and widely used by homes and businesses. These systems usually do not require batteries and also utilize ordinary solar inverters and therefore are connected to the public electricity grid. Any surplus solar energy which you generate is exported into the power grid and also you generally receive money off a feed-in-tariff (FiT) or credits to the energy that you export.
Unlike hybrid systems, on-grid solar systems are not able to operate or generate electricity during a blackout due to security reasons. Since blackouts usually occur when the electricity grid is damaged; when the solar inverter was still feeding electricity into a damaged grid it would risk the safety of the people repairing the fault in the system. Most hybrid solar systems with battery storage have the ability to automatically isolate from the grid and continue to provide some power during a blackout
Batteries are all able to be inserted into on-grid systems in a later point when required. The favourite Tesla Power wall two is an AC battery that can be inserted to a present solar system.

Steps when electricity reaches the switchboard:
• Metering systems work otherwise in several states and countries around the world. Within this description I am assuming that the meter is simply measuring the electricity being exported into the grid, as will be the case in the majority . In certain states, meters quantify each of solar power generated by your system, and therefore your electricity will probably run throughout your meter prior to reaching out the switchboard rather than following it.
• In certain regions (currently in California), the meter measures both production and export, and the consumer has been charged (or credited) for web electricity used within a month or year period. I shall describe more about metering in a subsequent blog

The electricity on grid
Electricity that’s delivered into the grid outside of your solar panel may subsequently be utilized by additional clients across the grid (your neighbours). Whenever your solar energy system isn’t functioning, or you are using more electricity in relation to the system is generating, then you are going to begin swallowing or importing electricity from the grid